Personal Essay. Title: Depression as a lack of Language 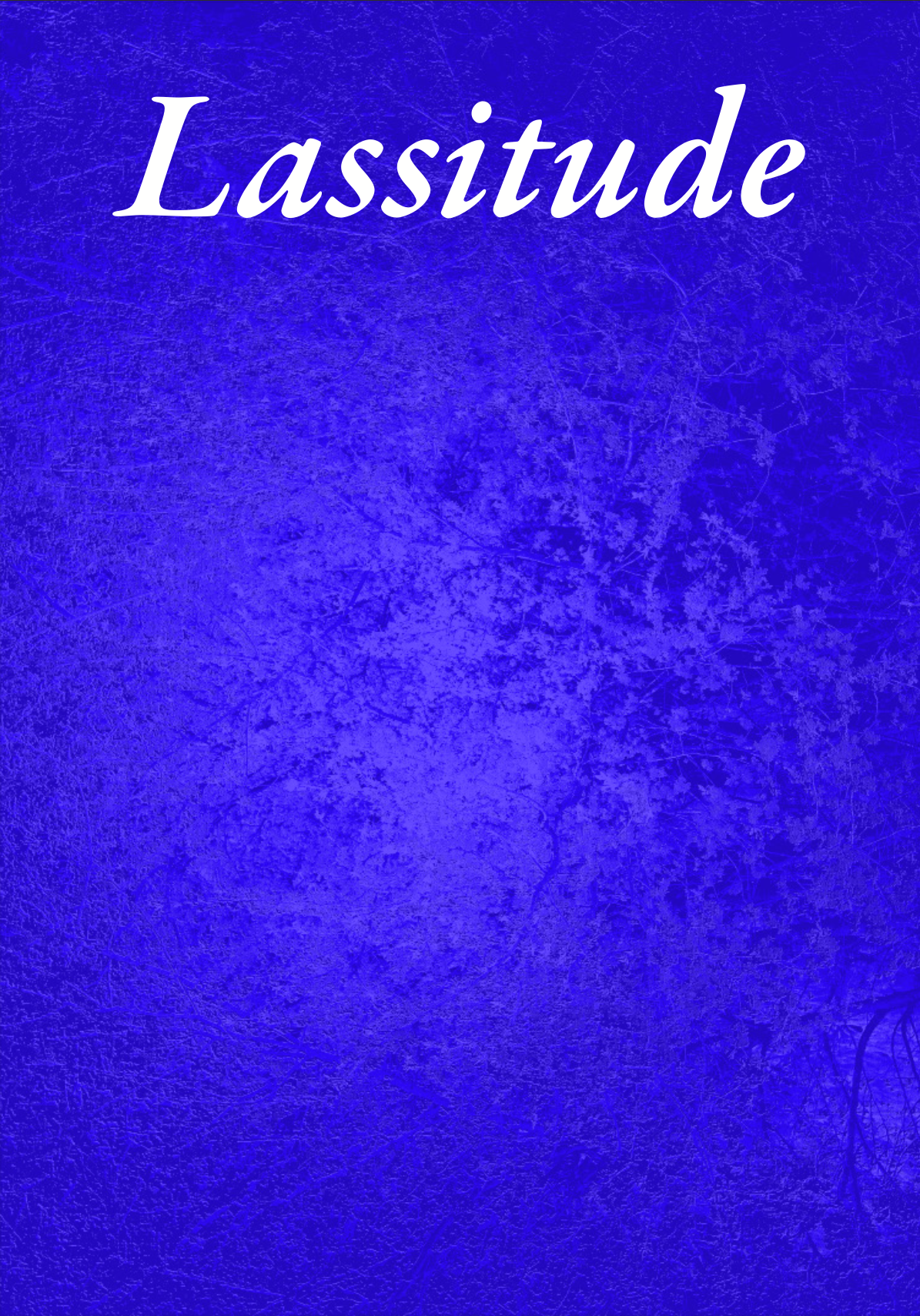 “You’ve lost a habitable Earth. You’ve lost the invitation to live that the Universe extends to us at every moment. You’ve lost something that people don’t even know is. That’s why it’s so hard to explain.”
— Gail Hornstein

“Depression doesn’t diminish a person’s desire to connect with other people, just their ability.”

In his novel Crime and Punishment, Fyodor Dostoevsky describes the inner state of someone condemned to death, who, an hour before his execution, says or thinks that “If he had to live on some high rock, on such a narrow ledge that he'd only have room to stand, and the ocean, everlasting darkness, everlasting solitude, everlasting tempest around him, if he had to remain standing on a square yard of space all his life, a thousand years, eternity, it were better to live so than to die at once.” and adds: “Only to live, to live and live! Life, whatever it may be!”. Needless to say, through this metaphor, Dostoevsky emphasizes the universal essence of the human condition.

Even ten years ago, when I read this book, and when my depression was still only quietly lurking in the background, I remember very clearly, how strange, bizarre, and even shocking it seemed to me, that someone would hold on to life with such desperation or could even experience such an aliveness. It just did not make sense: all my conscious life, I have experienced the reverse of it - endless, bottomless fatigue, the feeling of being stuck forever in a very moment when you are just about to fall asleep but need to keep yourself awake. But this constant effort to “stay awake” requires too much energy, and of course, leaves no room for real, raw aliveness, strong, untenable desire. So, in retrospect, rationally, I understand why such a metaphor confused me. Still, not being able to relate to what is mentioned as the essence of human nature feels overwhelmingly isolating. For me personally, such a sense of disconnect most accurately portrays how depression feels and how horribly lonely living with it can get.

When it comes to validation and generally, feeling like a real human with an actual disability - not a latently lazy person using “abstract terms” to get away with things, depression can get extremely tricky. For me, it was much more challenging back when I lived in Georgia, but it is still very tough now that I live in Germany. Despite the massive progress in awareness and tremendous differences in the quality of healthcare across countries, unfortunately, such experiences are universal. On a very trivial level, no matter where you live, having depression means simply lacking a clear language to articulate your pain. When you feel unable to articulate how something feels, you end up looking like someone “playing” or pretending at least some of your struggles, if not half of them. While In reality, you may be struggling even more than it’s possible to describe. People often make you feel like a “drama queen” or an attention-seeker, so no matter how hard you try to not take things personally, you still end up internalizing such notions.

Often, people judge you in such a stunningly arrogant way—and most often, these are the people who never even really googled the word “depression” properly, not to mention reading a chapter about it, or at least watching a documentary. They have not put in even a tiny bit of effort to try and understand you. Yet somehow, they imagine knowing you, or sometimes even seeing through you. They feel (for mysterious reasons) competent enough to judge you or give you advice and recommendations (good old “drink water and exercise”) and draw lines for you between what can be considered acceptable or unacceptable. And then, the most mind-blowing part is, that they even expect you to live within the lines they randomly doodled. And if you refuse, well, then, obviously, you don’t really want to get better.

But of course, such arrogant attitudes can not come down to individuals only, because

they are a result of larger systems. Kate Bowler, professor at Duke University, writer, and a stage-4 cancer patient describes the very core of the problem perfectly: "our society finds it especially difficult to talk about anything chronic — meaning, any kind of pain, emotional or physical, that abides and lives with us constantly. The sustaining myth of the American Dream rests on a hearty can-do spirit, but not all problems can be overcome. So often, we are defined by the things we live with rather than the things we conquer."

In Berlin, I started studying clinical psychology at a university, mainly to develop a language for my struggles and be able to find at least some answers to my own questions. Or to have something tangible to hold onto, something that would protect me from direct invalidation, “expert” opinions and unwanted advice, incompetence, and arrogance of some doctors. Even from my own family, friends, or partner. Something that I could put my hand on and say: See? I have a degree. I am much more qualified than you are, so you can’t directly invalidate me, you can't teach me or advise me. But even with a diploma, I still am who I was before: a very privileged person. Someone who “should” be happy and is “failing”.

While now, I am aware of the clinical language, symptoms, and diagnosis, still, I lack words, the language to articulate - what exactly, concretely, is wrong with me. How do I explain it to my boyfriend when I can't get out of bed the morning we were supposed to go to the park with our dog and have a nice picnic in the sun? To my friends, when I fail to attend their birthdays or weddings? What do I compare it with? Which words should I use to make it make sense? And how can I really blame people for not understanding, while I, too, judge and get sick of myself?

Sometimes, when I feel too down and fail to convince even myself that what I feel is real and valid, I re-watch Lars Von Trier's Melancholia. The last time I watched it, I thought that maybe, depression is one of those things that simply can not be grasped by language. Every time you try to “catch” it, articulate it, it slowly slips away. So no matter how desperately I’ll search for words, for the most sophisticated metaphors, fundamentally, they are doomed to fail.

In the article for BBC culture with the title: “Is Melancholia the greatest film about depression ever made?” Sophie Monks Kaufman mentions: “It is a film that, over the decade since its release, has become a kind of talisman for film fans who have experienced depression, such is the visceral power of its depiction. It is so powerful because it refuses to do what people in the grip of mental illness are often pressured to do: make the pain small. There is a defiance to making the pain so big that it literally prefaces the end of the world.” No wonder, that for such immense pain, words have and will always - fail. 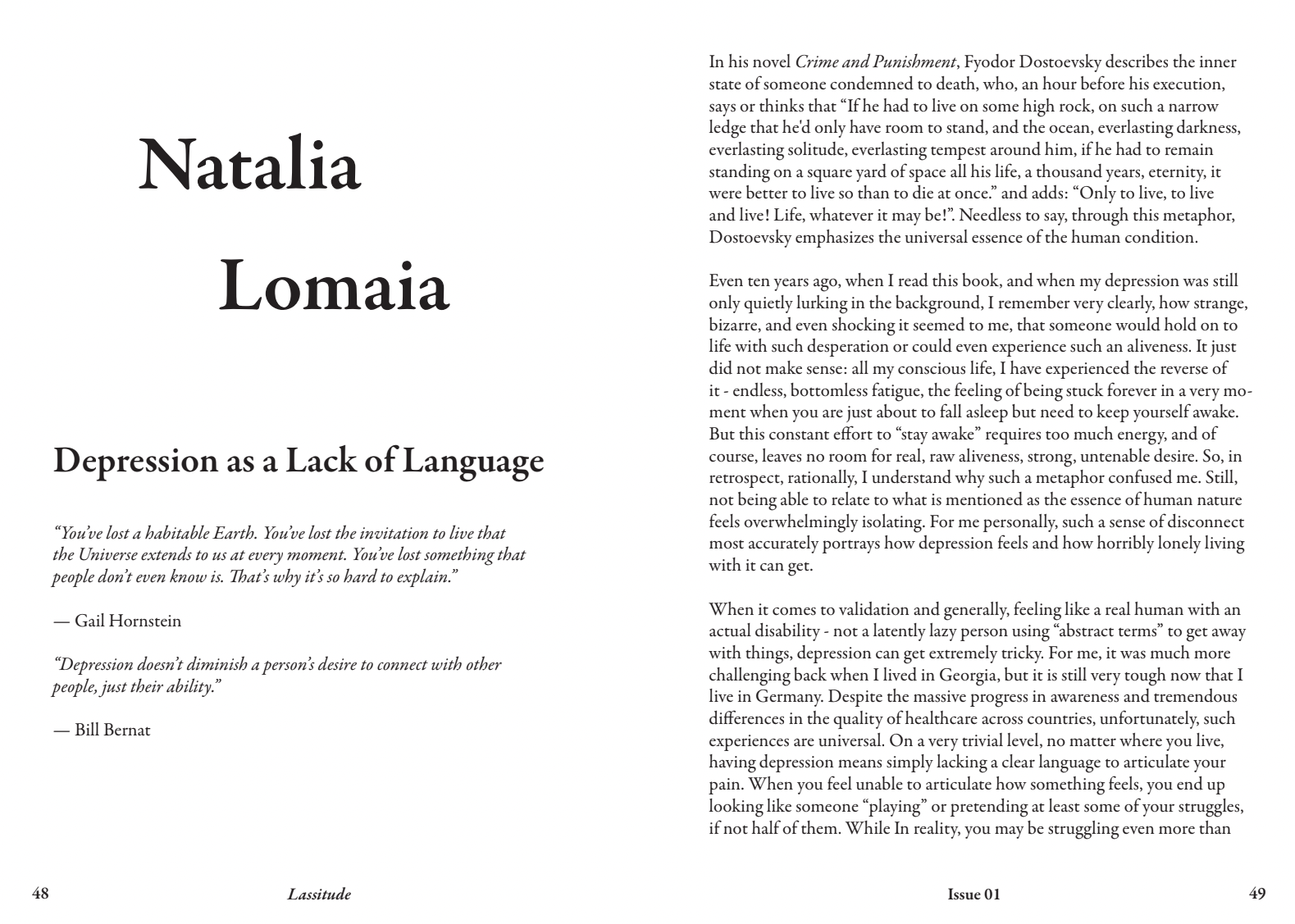 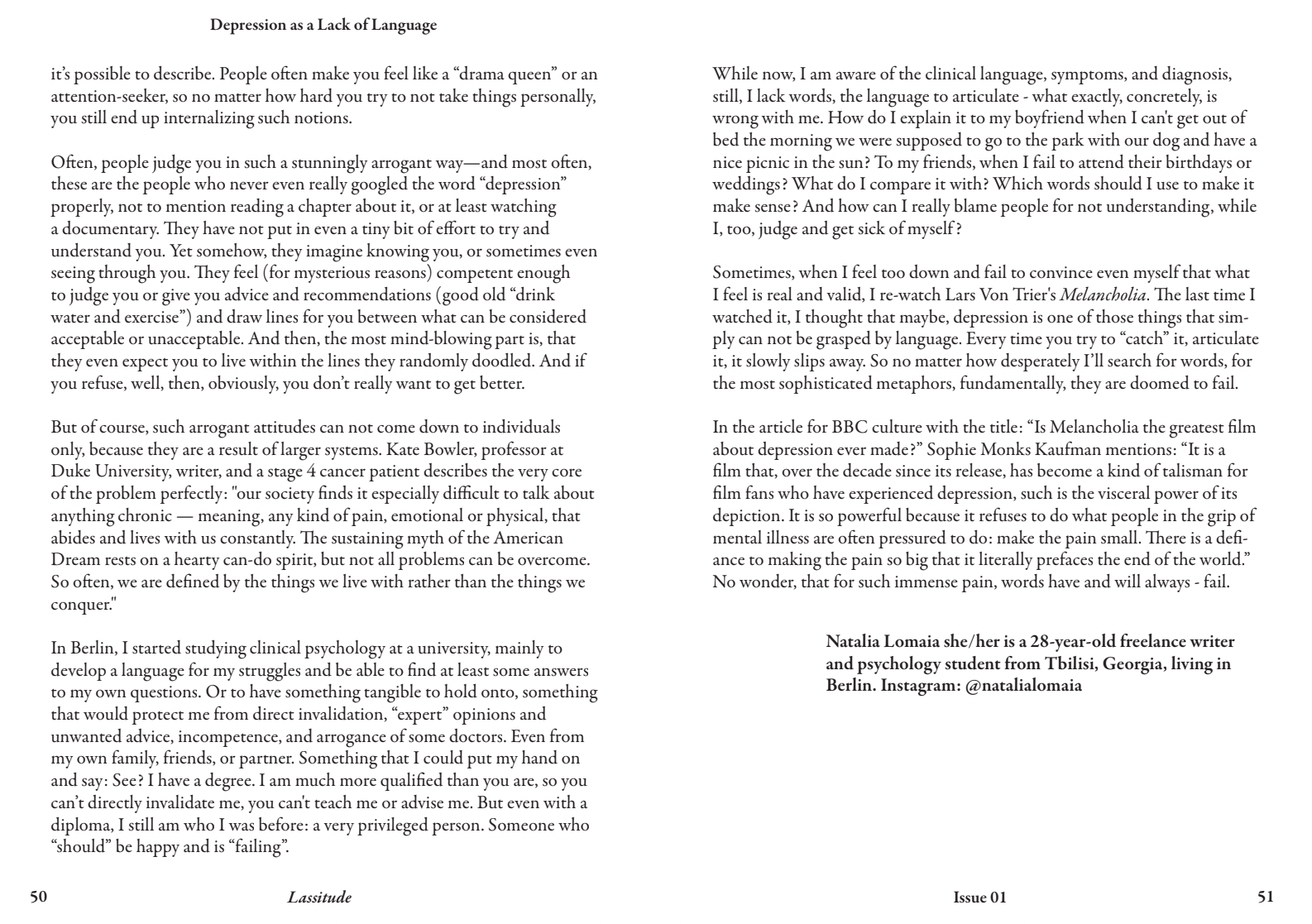 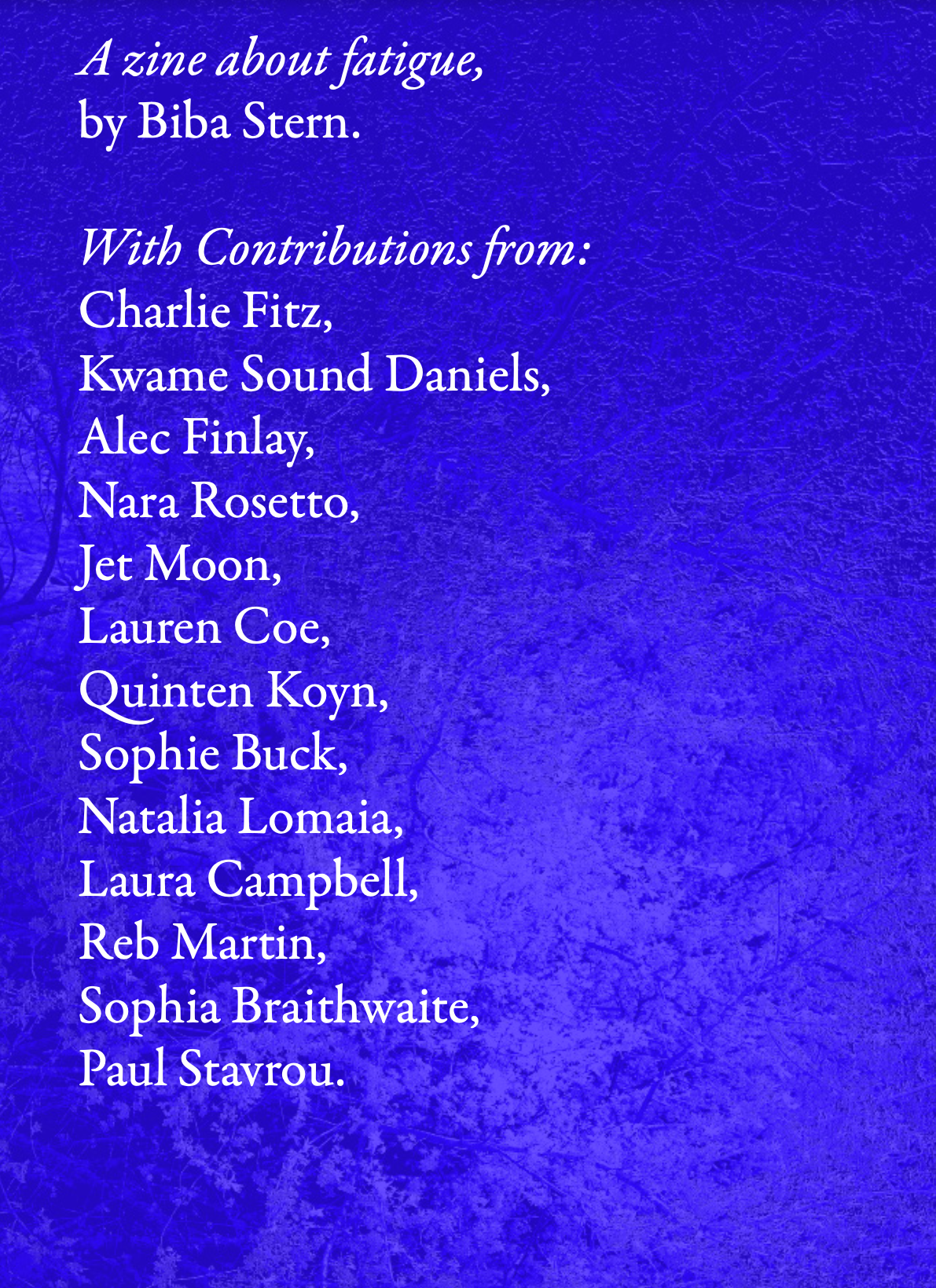